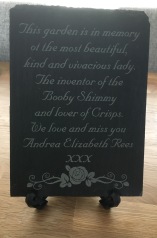 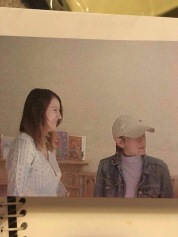 Two years ago we lost you…..

Remember the time you were so drunk you fell over the lion in Space nightclub, or the time your heel fell off your boot and we had to buy glue off the lady in the toilets. Remember when you cut your own fringe and looked like fryer tuck!

Remember when we used to walk for an hour to get to Lisa’s house, and the time my little sister had to buy me cigarettes because I got asked for ID!

Remember when we met friends at a pub and took them up on a ride home…..

I wish I Remembered more about you before, I wish we had never taken that ride home, I wish I wish…..

You May have no longer been the same little sister we grew up with, but you literally  became a butterfly. You were always smiling even though you must have been going through so much turmoil inside, luckily your brain didn’t let you dwell on who you used to be I guess that’s how the old Andrea had been forgotten, like you had always been this way. But you brought so much joy and laughter wherever you went. Your inappropriate behaviour had us in stitches at times shouting “your well fit” to random men on the street 🤦🏻‍♀️

I’ll always regret taking your visits for granted and I’m ashamed to admit at times it actually seemed like a little bit of a chore to sit there with you and answer the same question repeatedly, why did I not enjoy those moments more. I think I didn’t get too close because of my incredible guilt surrounding the accident, I guess it became easier to not think of you as the same little sister and not remember you were a “normal” teenage girl who had her whole life ahead of her.

14 years on we found out you had terminal Cancer, there was a lot of confusion around this situation and we didn’t get the full truth until August 2016. I feel some anger at not having the news sooner and only having limited time with you in the end. On the 20th August Mum called me and I rushed to the hospital, you didn’t look like you anymore, you looked like a wax work and you kept having fits after your epilepsy medication had been stopped to be replaced by Morphine. Every time  you had a fit I thought this is it, the way you looked during these didn’t look human it was heartbreaking. Finally in the early hours of the 21st after all the pain you had been through, I felt kind of relief for you as you finally went into your last sleep. I weirdly remember smiling down on you as you went I didn’t cry I felt strangely calm. It was around 10 minutes before I finally cried after seeing everyone else’s tears, it may sound strange but that time with everyone around you in the hospital was actually nice everyone put their differences aside and we were all together for the first time in a long while. Sadly after your funeral everyone went their own ways again.

Your funeral is kind of fuzzy to me I think we were all still in a bubble of grief. We carried your coffin which had a Luton Town flag on top, the flag blew over my face as we lifted you 🤣 I struggled with one hand to move it while balancing you on my shoulder. I didn’t cry at the Funeral until some of your favourite songs played, then me and your other sisters did a reading that’s when my heart finally broke for you and it became unbearable.

In our garden we built a rock Garden in memory of you, Tomorrow we will let Balloons go there we still miss you and I feel incredible pain these last few days. But I know it’s selfish grief as you were in too much pain to remain here.

So Andrea my dancing queen, Goodbye my friend, I can still feel your here xxxxx

I’m Claire I’m 36 years old, my little family consists of my Husband Chris and my children Lucy (18) Joshua (16) Maisey (14) and Cade (3).  I decided to start this Blog because It is coming up to the second year Anniversary since my Sister passed away so I want to tell her story.

My 17 year old sister Andrea could definitely be described as a rebel, she lived as she pleased and enjoyed every second. One evening after meeting some friends in a Pub, our lives changed forever.

Me and Andrea were offered a ride home by two friends of ours, I don’t remember much of what happened next.

The car had slid off the road somehow  and flipped over, Andrea had been trapped inside the car and partly gone through the windscreen. The pressure of the car flipping threw the door open and I had been thrown to the ground.

i vaguely Remember coming around in long grass next to a country lane, and brief memories of being at Bedford hospital for my minor injuries.

I cannot remember how I had been told about Andreas condition, she had suffered critical injuries. She had major brain trauma and serious body injuries. She would never be the same again and we were unsure she would even survive. We spent months at Addenbrooks Hospital awaiting news of her surgeries and treatments, the most horrendous time being during surgery to remove part of her skull to relieve pressure on her brain. After this surgery she had no frontal skull and her head sunk in at the front until a replacement piece had been inserted.

Andrea had been on life support for a few months before she was able to be transferred to a more local hospital. After this she lived at various care homes visiting home every few weeks. 14 years my beautiful sister lived in a wheelchair with severe brain trauma, All everyone ever says is she always had a smile on her face and she was such a happy lady. Her condition only ever got her down towards the end, Andrea came to Cades 1st Birthday in June 2016 she had lost so much weight and had been being fed through a drip in her nose. It broke my heart seeing her and I immediately knew something was very wrong, after weeks of tests she had been diagnosed with Cancer. It had spread all over her body and there wasn’t anything that could be done, we just had to wait for her to die.

On the 21st August 2016 my Mum called me and told me to get to the hospital ASAP this was it, time to say goodbye. I can’t really explain how it felt to watch my sister pass away, I think I was happy for her to finally be free and not in pain. I feel tremendous guilt for coming out of the accident unharmed (apart from minor injuries) and also for not making my times with her matter more, it all became part of normal life we all seemed to forget the person she was before the accident and I guess I took her for granted. I miss her and I wish I could hold her hand again.

its 2 years since we had to let you go, I don’t want to selfishly wish you back because I know you were in pain. But I do miss you and can’t listen to an ABBA song or watch beauty and the beast without feeling tremendous heartbreak, I think about your smile and your hilarious but completely inappropriate behaviour at times, you were our dancing queen with your booby shimmy. I just hope if you are somewhere else you aren’t unhappy and wanting to come home that’s my biggest fear. I lost my little sister 14 years ago but we gained an amazing, happy, beautiful lady who must have enjoyed life even with the horrendous injuries and lack of a “normal” adult life. My beautiful sister, my hero and my biggest regret.